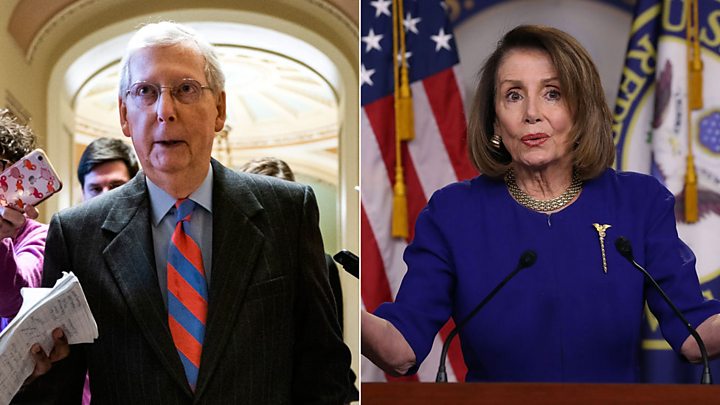 President Donald Trump will declare a national emergency to fund his planned border wall with Mexico, the White House says.

He is to sign a border security bill to avert a government shutdown – but also act to bypass Congress and use military funds for the wall, a statement said.

Senior Democrats have responded by accusing him of committing a “gross abuse of power” and a “lawless act”.

Congress must first pass the bill before it is signed by the president.

Building the wall was a key election promise but Mr Trump has so far been unable to get the necessary funding.

What did the White House say?

“The President is once again delivering on his promise to build the wall, protect the border, and secure our great country,” White House Press Secretary Sarah Sanders said in a statement on Thursday.

She added he would “take other executive action – including a national emergency – to ensure we stop the national security and humanitarian crisis at the border”.

The compromise legislation includes $1.3bn (£1bn) in funding for border security, including physical barriers, but it does not allot money towards Mr Trump’s wall. Mr Trump had wanted $5.7bn for the wall.

When Mr Trump warned that he might declare a national emergency over his wall earlier this year, some Republicans argued it would only set a dangerous precedent.

Speaking on the Senate floor on Thursday, however, party leader Mr McConnell indicated his support for the move, saying the president was taking action with “whatever tools he can legally use to enhance his efforts to secure the border”.

The Senate has passed the border security bill, which is now expected to go to the House of Representatives at about 18:30 EST (23:30 GMT).

How have Democrats responded?

Speaker of the House Nancy Pelosi has already suggested a legal challenge from Democrats should the president make an emergency declaration.

“Declaring a national emergency would be a lawless act, a gross abuse of the power of the presidency and a desperate attempt to distract from the fact that President Trump broke his core promise to have Mexico pay for his wall,” they said.

“He couldn’t convince Mexico, the American people or their elected representatives to pay for his ineffective and expensive wall, so now he’s trying an end-run around Congress in a desperate attempt to put taxpayers on the hook for it.”

The Democrats vowed that Congress would “defend our constitutional authorities”.

Getting around Congress, not through it

A month ago, in the midst of the federal government shutdown crisis, a consensus had emerged that the easiest way out for the president was to back down from his demands for congressional border wall appropriations while declaring a “national emergency” to commandeer funds from other sources.

It took a while, but the path of least resistance was the one Donald Trump followed.

He extricated himself from a predicament of his own making, while taking action that he can cite to supporters as evidence that he’s fulfilling his “build the wall” campaign promise.

Of course, the drawbacks to this course that were apparent in January are still there.

Republicans fear this will set a precedent for presidential power that Democrats can someday use to circumvent the will of Congress.

The emergency declaration is sure to get bogged down in court challenges, which means it may not have much tangible benefit anytime soon.

And, as much as the president may like to spin this as a victory by other means, he still backed down in the face of Democratic resistance in Congress.

The shutdown fight was always about more than just the wall – it was a battle over who would set the political agenda for the next two years of the Trump presidency.

And if this resolution is any indication, if the president wants to get his way he’s largely going to have to find ways around Congress, not through it.

What is a national emergency?

A state of emergency is declared in times of crisis. In this case, Mr Trump says the crisis is being caused by migrants arriving on the US-Mexico border.

Experts say declaring a national emergency would give the president access to special powers that effectively allow him to bypass the usual political process.

He would be able to divert money from existing military or disaster relief budgets to pay for the wall.

However there is debate about whether the situation at the southern US border constitutes such an emergency.

On the one hand, more than 2,000 people were turned away or arrested at the border each day during November alone. Supporters say this equals an emergency.

Others argue the figure is far lower than a decade ago, and many of the thousands of people who travelled north from countries like Honduras are presenting themselves as asylum seekers, looking to enter the country legally.

You weren’t suprised, were you?