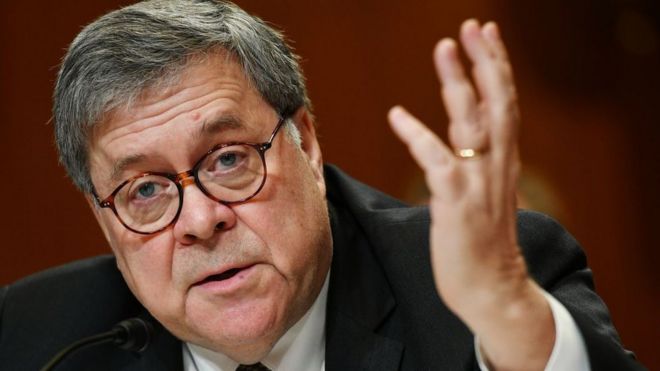 Democrats in the US House of Representatives have decided to launch contempt proceedings against Attorney General William Barr.

They took action after he failed to comply with a House Judiciary Committee subpoena to submit an unredacted version of the Mueller report.

The Department of Justice had previously called the request “premature and unnecessary”.

The Democratic-led committee said the vote would be held on Wednesday.

The attorney general, who was appointed by the president, also missed a deadline last week to release an uncensored version of the report.

What did committee members say?

Jerrold Nadler, the Democratic chairman of the House Judiciary Committee, said in a statement on Monday: “Congress must see the full report and underlying evidence to determine how to best move forward with oversight, legislation, and other constitutional responsibilities.

“The Attorney General’s failure to comply with our subpoena, after extensive accommodation efforts, leaves us no choice but to initiate contempt proceedings.”

But Doug Collins, the top Republican on the committee, dismissed the Democratic move as “illogical and disingenuous”.

“Democrats have launched a proxy war smearing the attorney general when their anger actually lies with the president and the special counsel,” the Georgia congressman said.

Six committees in the Democratic-controlled House are demanding the release of the full Mueller report as part of ongoing investigations into US President Donald Trump.

What does a contempt vote mean?

A contempt vote alone may serve merely as a symbolic rebuke of the attorney general.

For Mr Barr to actually face criminal charges, the entire House – including Republicans – would first have to approve it.

Such a move against an attorney general is not unprecedented, however.

Eric Holder, who served under President Barack Obama, was held in contempt by the then-Republican-controlled House for a botched attempt to track illegal guns.

Mr Holder became the first sitting attorney general held in contempt of Congress after he failed to hand over files related to the operation.

But as expected, the justice department did not pursue charges against Mr Holder.

What has President Trump said?

Mr Trump said on Twitter on Sunday that the special counsel must not testify to lawmakers, as Democrats desire.

The Republican president had previously said he would not block Mr Mueller from giving evidence to Congress, and leave a final decision to Mr Barr.

The 448-page Mueller report found no collusion between the Trump campaign and Russia during the 2016 election campaign, but did not reach a conclusion on obstruction.

“Why would the Democrats in Congress now need Robert Mueller to testify,” Mr Trump tweeted on Sunday.

“There was no crime, except on the other side (incredibly not covered in the report), and no collusion.”

It emerged last week that Mr Mueller had written Mr Barr and expressed frustration that the attorney general’s summary did not capture the full context of the special counsel’s findings.

Tension between Mr Barr and congressional Democrats is already high.

Earlier this month, the attorney general refused to testify to the Democratic-led House Judiciary Committee after Democrats insisted he be questioned by a staff lawyer. He did, however, testify last week for five hours to the Senate Judiciary Committee.

Senior Democrats have called on him to resign, accusing him of lying, while Republicans have argued that Mr Barr is being targeted for political gain.