Letitia James said the NRA had diverted millions of dollars to leaders including its head, Wayne LaPierre, for their personal use.

“For these years of misconduct we are seeking an order to dissolve the NRA in its entirety,” she said.

The NRA described the lawsuit as a “baseless, premeditated attack”.

What did the Attorney General say?

Ms James said that the four named defendants – Mr LaPierre, Wilson Phillips, Joshua Powell and John Frazer “instituted a culture of self-dealing, mismanagement and negligent oversight at the NRA that was illegal, oppressive and fraudulent”.

The attorney general outlined a litany of charges against the defendants, but accused Mr LaPierre, long the face of the powerful gun lobby group, of being the “central figure” behind the organisation’s wrongdoings.

One example of misconduct alleged in the lawsuit states that Mr LaPierre visited the Bahamas more than eight times by private plane using funds intended for the NRA, for a total cost of $500,000 (£380,225).

The corruption “is so broad”, Ms James said, that total dissolution of the organisation is necessary.

Responding to questions, Ms James, a Democrat, rejected the notion that the charges against the NRA – closely tied to the Republican party – were at all influenced by her own politics.

“We followed the facts and the law,” she said. “We’ve come to the conclusion that the NRA unfortunately was serving as a personal piggy bank to four individual defendants.”

What is the NRA?

Founded in 1871 as a recreational group designed to “promote and encourage rifle shooting”, the National Rifle Association has grown into one of the most powerful political organisations in the US.

The NRA now lobbies heavily against all forms of gun control and argues aggressively that more guns make the country safer. It relies on, and staunchly defends, a disputed interpretation of the Second Amendment to the US Constitution, which it argues gives US citizens the rights to bear arms.

The NRA spends about $250m per year, far more than all the country’s gun control advocacy groups put together.

The organisation has boasted some high-profile members over the years, including former President George HW Bush. Mr Bush resigned from the group in 1995 after Mr La Pierre referred to federal agents in the wake of the Oklahoma City bombing as “jack-booted thugs”.

I’m writing to you today to ask you to take action.

I don’t need to explain to you the unique difficulty of the situation we’re in right now. I know that you understand just how serious, important, and unprecedented this moment is. Communities across the country have been rising up and protesting police brutality and systemic discrimination, and they’re being met with disproportionately violent repression. All the while, a pandemic continues to ravage our country at an appalling rate: Over 100,000 have died from COVID-19 thus far, and that number continues to climb by the day.

I know that you aren’t going to just observe from the sidelines. MoveOn’s 20-year history has shown that MoveOn members like you take action in a big way—especially when things are really bad. You don’t just observe, you act.

Will you take action right now by starting an online petition on an issue that’s impacting you or your community during this tumultuous time?

Get started today and start a petition on an issue that matters to you.

What upsets you the most right now? Having seen the Trump administration’s dangerous rhetoric fanning the flames of police violence and racial hatred, will you step up and call for Trump to stop? Start a petition to Donald Trump demanding that he take the demands of protesters seriously.

Are you ready to call for massive police reform amidst all this police violence? You can start a petition to your local government to cut police funding and reallocate it to health and social services.

I know that you care about many people and issues, and that you want to take action. You might think, “I do, sure, but what will starting a petition do?” It almost feels too easy. A few clicks, a little bit of typing, and that’s supposed to make a difference? But, Robert, I promise you, it does make a difference.

In May of 2019, MoveOn Civic Action joined with coalition partners to organize the largest petition delivery in U.S. history, delivering 10 million signatures calling for impeachment—and Donald Trump was impeached. Petitions show grassroots power and put pressure on politicians to act.

And on May 21 of this year, a petition started by a MoveOn member, calling on Congress to provide essential frontline workers with hazard pay and that has—as of this moment—1,397,913 signatures was delivered to the Senate, along with a petition for an Essential Workers Bill of Rights, to ensure that workers come first in the next relief package passed by Congress.

You have the power to make a difference. Will you start a petition today and advocate for an issue that matters to you?

–Isbah, Corinne, Arvin, Emily, and the rest of the team 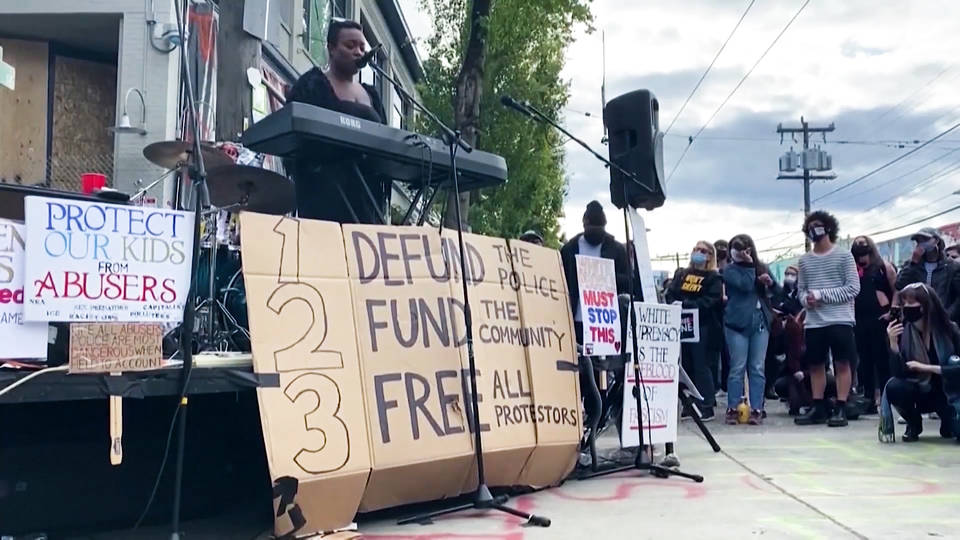 In Washington state, a veto-proof majority of the Seattle City Council has backed a proposal to slash the Seattle Police Department’s budget by 50%. Seattle’s mayor and police chief have opposed the move to defund the police.

Following victories in early primary states, Senator Bernie Sanders is surging in polling across the country – with key states and the national averages seeing increases. Does the recent “Sanders surge” affect whether you support him?

Do you support Bernie Sanders in the Democratic primary?

With the current lead that Bernie Sanders has over other candidates in the race, some are calling for progressives to consolidate their support and rally behind Sanders as the nominee; but with only two states having completed their primaries, others are calling the move premature.

What do you think, Robert – should progressives unite behind Sanders or wait until more states finish their primaries?

Trump’s attack on our planet now includes the largest elimination of protected land in American history.

Now, he’s urging fossil fuel companies to drill and mine (even though his administration is being sued over the reductions AND companies haven’t expressed that much interest).

We’re determined to end Trump’s reign of environmental destruction in November, but we need all the support we can get. Will you join us in the fight? Click here to add your name.

Trump and the GOP couldn’t care less about our planet’s future. They can’t see past their dark-money glasses to care enough. They have absolutely no business running anything, let alone the U.S. government.

Join us in sending a clear message to Trump and his polluting cronies: protected lands are NOT for sale.

Thanks for standing with us.

SIGN THE PETITION
Without disclosing the sources of their funding, powerful groups have used dark money to pour $1 billion into federal elections since 2010.

Without transparency, voters don’t know who is trying to influence them or to whom a candidate is beholden. Without bold changes to our current laws, the problem will only grow worse. Congress must put an end to this now!

SIGN THE PETITION
Thanks for all you do,
Erin Tulley, Daily Kos