This was just shared with me and I would ask you to share, including Maria’s words. Those of us who have been working on IPD and the Penobscot River issue know that JM is no friend of the Penobscot people and we must make sure when we talk about this wonderful news that we stress that it may have been JM’s pen, but it was no her heart and soul that was bought many years ago by the corporates!

And the best news of the day… JM [Governor Janet Mills] signed onto Indigenous People’s Day, making it a statewide holiday.  Thanks to all those who worked so hard to make this happen at the municipal level to get the ball rolling and beyond.  JM gets all the credit for a swipe of the pen but we know how much work and heart went into this from indigenous leaders and their supporters, etc. ;).  I’m also pasting Maria Girouard’s post below too for those who don’t use FB.  I appreciated it!

NOT SO FAST ~ I’m not even sorry that I cannot join the glee and celebratory backslapping that I’m seeing around the change from a white man’s holiday to an indigenous holiday.  To see “leaders” standing with the woman who is in the forefront of perpetuating trauma and genocide against the Penobscot people sickens my stomach.  I’m very pleased to see my Chief NOT standing amongst them.
In a Machiavellian plot twist the perpetrator of Penobscot territorial theft is now a hero (?) for tossing us a bone.  Holding in my heart our ancestral River and the struggles of countless ancestors before me who fought and died for their rights to their ancestral river, I’m not letting her off the hook.
Nothing short of dropping the state’s position in our 6 year long legal battle, Penobscot Nation v. Janet Mills will change my opinion of that woman.  The same woman who is championing the destruction of thousands of acres of Maine land to make way for the CMP corridor to benefit Massachusetts energy needs.  The same woman who sat before judiciary committee in 2015 and said that the Penobscot Nation did not have the right to protect their women from violence under the VAWA Re-authorization Act because of the Maine Indian Land Claims – the State’s handy pocket tool for keeping the Tribes oppressed and under their thumb.  And another time before the judiciary stated that “there are NO treaties”.  In my eyes she is a disgrace no matter what the second Monday in October is called.
Yay! Now we no longer celebrate a genocidal maniac. That is the right thing to do for sure. Now will the State stop acting like a genocidal maniac and drop their stance that the ancient Penobscot Nation contains no portion of our ancestral river. This remains to be seen. N’telnapemnawak.
#notmyhero

Catholic school students may face expulsion for their behaviour at Indigenous Peoples March in Washington. 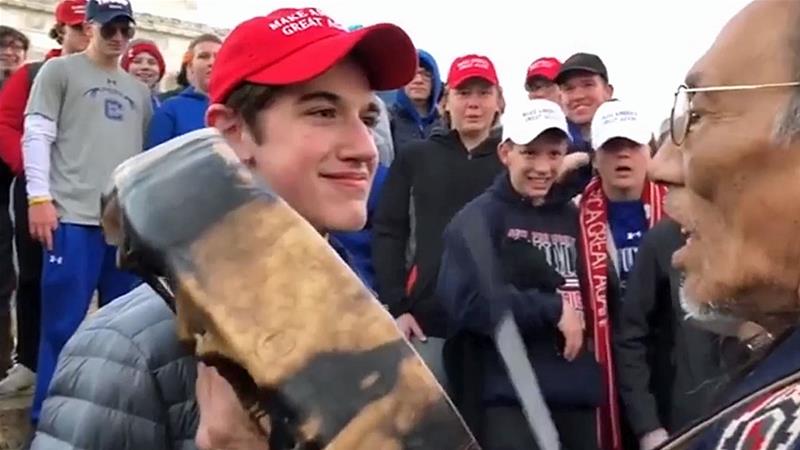 A US diocese has apologised and vowed to take action after videos emerged showing boys from a Catholic private school mocking an elderly Native American man at a rally in the capital, Washington, prompting widespread criticism.

The Indigenous Peoples March in Washington on Friday coincided with the March for Life, which drew thousands of anti-abortion protesters, including a group from Covington Catholic High School in Park Hills, Kentucky. 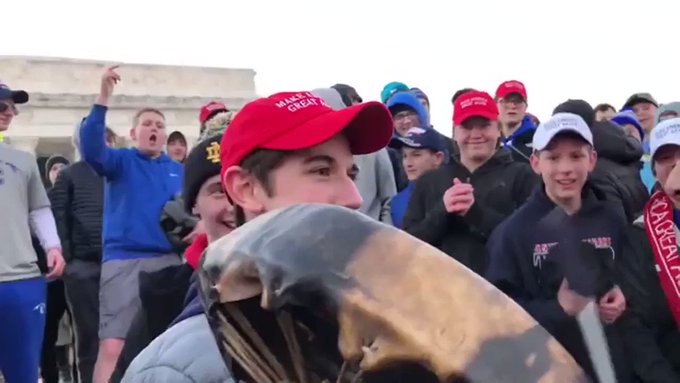 In a joint statement, the Roman Catholic Diocese of Covington and Covington Catholic High School apologised to Phillips. Officials said they are investigating and will take “appropriate action, up to and including expulsion”.

“We extend our deepest apologies to Mr Phillips,” the statement read. “This behaviour is opposed to the Church’s teachings on the dignity and respect of the human person.”

According to the “Indian Country Today” website, Phillips is an Omaha elder and Vietnam veteran who holds an annual ceremony honouring Native American veterans at Arlington National Cemetery.

Marcus Frejo, a member of the Pawnee and Seminole tribes who is also known as Chief Quese Imc, said he had been a part of the march and was among a small group of people remaining after the rally when the boisterous students began chanting slogans such as “Make America great” and then began doing the haka, a traditional Maori dance.

Frejo told the AP news agency that he felt they were mocking the dance and also heckling a couple of black men nearby.

“When I was there singing, I heard them saying, ‘Build that wall, build that wall’,” Phillips said, as he wiped away tears in a video posted on Instagram. “This is indigenous lands. We’re not supposed to have walls here. We never did.”

In another video posted on Twitter, an Indigenous Peoples March protester shouts: “Just because you stole the land don’t make it yours,” to which a student wearing an Owensboro Catholic High School logo responds, “Land gets stolen, it’s how it works. That’s the way of the world.”

Frejo said he joined Phillips to defuse the situation, singing the anthem from the American Indian Movement with both men beating out the tempo on hand drums.

Although he feared a mob mentality that could turn ugly, Frejo said he was at peace singing despite the scorn. He briefly felt something special happened as they repeatedly sang the tune.

“They went from mocking us and laughing at us to singing with us. I heard it three times,” Frejo said. “That spirit moved through us, that drum, and it slowly started to move through some of those youths.”

Eventually, a calm fell over the group of students and they broke up and walked away.

State Rep Ruth Buffalo, a North Dakota politician and member of the Mandan, Hidatsa and Arikara Nation, said she was saddened to see students showing disrespect to an elder who is also a US military veteran at what was supposed to be a celebration of all cultures.

“The behaviour shown in that video is just a snapshot of what indigenous people have faced and are continuing to face,” Buffalo said.

Here’s another video of these kids harassing this Native American protestor. The ignorance, the bigotry, is infuriating. This is not the future of this nation.

She said she hoped it would lead to some kind of meeting with the students to provide education on issues facing Native Americans.

US Rep Deb Haaland, of New Mexico, who is a member of the Pueblo of Laguna and had been at the rally earlier in the day, used Twitter to criticise what she called a “heartbreaking” display of “blatant hate, disrespect, and intolerance”.

Haaland, who is also Catholic, told AP she was particularly saddened to see the boys mocking an elder, who is revered in Native American culture. She placed some of the blame on President Donald Trump, who has used Native American names such as Pocahontas as an insult.

“It is sad that we have a president who uses Native American women’s names as racial slurs, and that’s an example that these kids are clearly following considering the fact that they had their ‘Make America Great Again’ hats on,” Haaland said. “He’s really brought out the worst in people.”

City and town councilors voted in favor of that change Monday night.

Columbus Day is a federal holiday which Portland city councilors have no control over.

Some were against the change, claiming Christopher Columbus is a part of America’s history.

Others disagreed, claiming it was the indigenous people who found our county, and the change would be an outlet to reveal the truth.

Federally, America has celebrated Columbus Day since the 1930s. Some residents recommended councilors chose a different date, but councilors voted unanimously for Indigenous Peoples’ Day, claiming Portland residents have the opportunity to celebrate which ever they’d like.

The resolution was sponsored by City Councilor Pious Ali. He says he’s very pleased with the outcome.