Maine is rated among the worst in the country for child sex trafficking.

The Bangor Daily News says Maine is an East Coast source to procure children. Those who know Maine’shistory are not surprised.

Only a few years ago, when students at Baxter School for the Deaf refused sexual abuse by their director, Dr. Robert Kelly, he tied them naked to a tree and left them, all night, in the Maine woods; to break them.

Dr. Robert Kelly was not prosecuted. The State of Maine protected Kelly and not Maine’s children. The Attorney General (AG) refused to prosecute any of the Baxter School rapists. Instead, Maine used tax-payer funds to pay Kelly’s pension through-out his retirement in Florida until he finally died, as reported by Rick Wormwood, in 2004.

One survivor of Dodd’s abuse, Rick Alexander, spoke about his rape “behind my aunt’s house, handcuffed, getting sodomized by Stephen Dodd.” In spite of receiving full retirement and enjoying total impunity, Dodd complained “the Chief had not given him a retirement plaque and identification card.”

No prosecution, no oversight, no justice and full retirement. That is all too often how Maine deals with elite child rapists. When children are tied naked to pine trees as a “grooming” exercise for rape, when a young boy is handcuffed, his face pushed into the grass, while being raped by a police officer and no one is prosecuted, the devil is walking the halls of Maine’s Attorney General’s office.

I stumbled upon the cover-up of child rape and torture at the Baxter School when I delved into the Freedom of Information Act files about child rape by Maine’s Catholic priests. For three years Jeannine Guttman, formerly Executive Editor of the Portland Press Herald, fought to get the State to release these records. When Maine did release, it was only records of deceased or Alzheimer’s priests.

If the Catholic Church documents weren’t painful enough, learning about the abuse at Pineland School, Élan School, in the Native American communities, Cole Farms, and allegations of child protection operating a child rape ring with professors were equally horrific.

Under Governor Paul LePage, Maine established a Truth and Reconciliation Commission to create a public record of what child protective services did, and continues to do, to Native American children but there has been no justice, no prosecutions, no accountability. Senior child protection staffer, Cynthia Wellman’s allegations of a child trafficking ring have never even been investigated, let alone prosecuted.

Robert Tristram Coffin was one of America’s great poets. Coffin spoke about sons and daughters of Maine, rock-bound coasts, and pine-trees. A place where one can still see the Milky Way at night; where old-fashion values are held sacred and folks are judged, not by their financial wealth, but the weight of their human souls.

That is the Maine I knew until my daughter was trafficked for sex abuse by Judge Moskowitz. I started researching Maine’s dark history of child sex abuse to understand how this could have been allowed to happen to my daughter. So-called “good Mainers,” who cultivate public images as “pillars of the community,” have been allowed to plunder, rape, and torture generations of children. Those, like Rod Hotham and James Levier, who raised their voices in pain and outrage have been silenced.

Decades of shameful silence and impunity for child rape continues in Maine. Adult survivors like Matt Lauzon are now coming forward but children like Ayla Reynolds, Logan Marr, and my daughter Mila Malenko have been silenced. My daughter’s case, and that of many other children, is being treated exactly as the child rape by Biddeford police, at Baxter, within the Catholic Church, at Cole Farms, at Pineland, at Élan School, and within Native American communities and by child protection staff; cover-up, deny, protect the abuser not the children.

This is not “historical” abuse. This is on-going abuse. Happening right now, every day, to children in Maine, while Maine’s AG, at the time, Janet Mills protected the child rapists and not the children.

Maine has been recognized by the Bangor Daily News as a source for the entire East Coast to procure children because there is a powerful state-system in place that allows this to happen.

There are known, and protected, supply-lines of children to abuse. Foster care, child protective services, day cares, family courts, disabled children, police officers who look the other way, Native American children; wherever vulnerable children are, that is where access to rape these children is maintained by the pedosadists in power in Maine.

Dr. Rev. Martin Luther King said “Our lives begin to end the day we become silent about things that matter.” 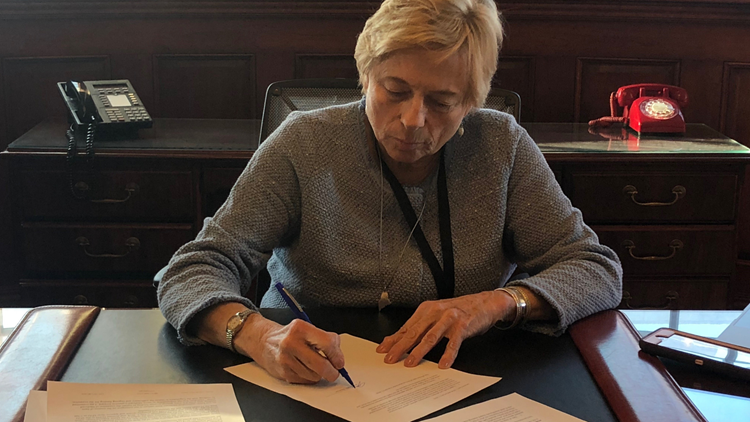 On her first day in office, Governor Janet Mills signed an executive order calling for the Department of Health and Human Services to begin implementing the expansion of Medicaid that Maine voters passed more than a year ago.

Mills took little time to bask in her historic win as Maine’s first female governor back in November before declaring she would implement the expansion that voters had passed last November.

The expansion will make Medicaid available to roughly 70,000 more Mainers.

Mills predecessor, Gov. Paul LePage had vehemently opposed the expansion and refused to implement it even after Maine voters passed it.

Mills had vowed to sign the expansion on her first day and that is exactly what she did Jan. 3.

Mills had said she would take immediate action to expand treatment and prevention for the opioid drug epidemic. She says Medicaid expansion will also help get more people into drug treatment.