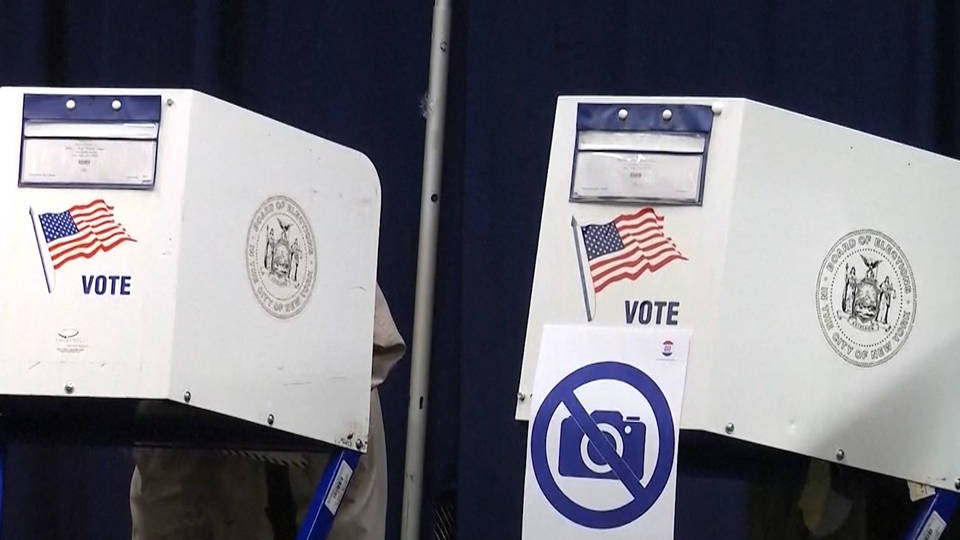 The North Carolina State Board of Elections has thrown out the results of November’s congressional race in the 9th District and ordered a new election, after more evidence came to light of a Republican effort to tamper with absentee ballots. The race had pitted Republican Mark Harris against Democrat Dan McCready. Harris initially appeared to be the narrow winner, but the race was never certified. For months Harris, who is a Baptist preacher, had insisted his campaign did nothing illegal, but on Thursday he called for a new election. This came a day after Harris’s own son—Assistant U.S. Attorney John Harris—testified that he had warned his father about hiring a longtime political operative who had a record of illegally collecting absentee ballots and in some cases filling them out in favor of Republican candidates. North Carolina’s Democratic Gov. Roy Cooper praised the board’s decision, saying it “sends a strong message that election fraud must not be tolerated.” President Trump—who has repeatedly warned about Democrats stealing elections—has yet to comment about the latest news from North Carolina.

Newly elected Democratic Congress-Woman  Rashida Tlaib of Michigan made headlines last week for declaring, “We’re going to go in there, and we’re going to impeach the motherfucker,” in reference to President Donald Trump. Tlaib made the comment at a Washington, D.C., bar, days after she made history last week when she and Ilhan Omar of Minnesota became the first Muslim women sworn in to Congress. Tlaib is part of the most diverse and most female class of representatives in U.S. history.

BANGOR (NEWS CENTER Maine) – At 10 am on Wednesday, December 5, a federal judge will hear new arguments in the lawsuit filed by Congressman Bruce Poliquin over whether of not ranked-choice voting is constitutional. The hearing will take place at the Bangor Federal Building.

What the judge decides in this case may not be the end of things. Bruce Poliquin is asking the judge to rile a new election be held if he does not rule against ranked-choice.

RELATED: RCV Fight: Poliquin calls for ‘new election’ if judge does not rule against ranked-choice

On top of all this, the Secretary of State’s office is preparing for a recount in the second-district congressional race. Secretary of State Matt Dunlap says that process is set to begin Thursday, December 6. However, because of the holidays, we may not know the results of the recount until the new year.

Washington, DC – A week and a half after the United States midterm elections, the true scope of a vote that brought Democrats control of the House of Representatives but left Republicans, the party of President Donald Trump, holding power in the Senate is coming into view.

Democrats gained at least a 231-to-198 majority in the House, while Republicans held onto and will likely expand a 51-to-47 majority in the Senate, with some races in both chambers yet to be concluded.

It’s a contradictory outcome that reflects both the deep political divisions within the US and, increasingly, the antiquated quirks of the American Constitution that stem from the nation’s beginnings in 1787 as a federation of self-governing states.

“It shows that majoritarian democracy does not directly translate at the electoral level and the idea of ‘The Will of the People’ is intervened by the structural arrangements endemic to the American Constitution,” said John Jackson, a visiting professor at the Paul Simon Public Policy Institute at Southern Illinois University.

“In effect, we can easily come out with minority rule and that’s what we’ve had, and what we continue to have in the recently concluded elections,” Jackson told Al Jazeera.US Senate

In the US Senate, as set out in the Constitution, each of 50 states is represented by two senators, meaning the populations of large states like California and New York are underrepresented while small states like Alaska and North Dakota are overrepresented. Indeed, the incoming Republican majority in the Senate represents 26 million fewer people than the Democrat minority.

The midterms show Trump might not get re-elected in 2020

More than four million people who live in Washington, DC, and territories like Puerto Rico, Guam and American Samoa are not represented in the Senate at all.

The disparity in the US Senate matters has become a more pronounced problem as Senate Republican leaders have abandoned old rules that required a 60-vote majority to approve lifetime judicial appointments to the federal bench. Trump’s Supreme Court nominee Brett Kavanaugh was confirmed by a narrow majority of Senators representing 41 million fewer Americans than the losing side.

Looking forward, political analysts say it is quite likely that a Republican-controlled Senate, representing a minority of Americans, would block policy prescriptions and legislation favoured by a future Democrat president and majority Democrat House of Representatives.

Similarly, the US Electoral College, which determines the outcome of presidential contests, is based on state-by-state apportionment of delegates. In 2016, Trump won the election over Hillary Clinton by a 306-to-232 Electoral College margin while losing the nationwide popular vote by nearly three million.

In 2000, former president George W Bush fell short of Al Gore in the popular vote but won the election with a majority of Electoral College delegates after the US Supreme Court halted a recount in Florida and awarded the state to Bush.

Trump won in 2016 because he narrowly swept Pennsylvania, Michigan and Wisconsin, a feat that may be difficult for him in 2020 after Democratic wins in those states on November 6.

In Arizona, Democrat Kyrsten Sinema won a US Senate seat for the first time in decades and a Democrat won in Nevada signalling what may be a significant shift towards Democrats in the Southwest.

Can the system change?

Indeed, what looked like a modest win for Democrats on November 6 is proving to be a wider and deeper victory, even if the Senate remains out of reach.

House Democrats did very well in districts where Clinton won in 2016 but Republican members of Congress remained in office, or in districts where Trump did slightly better than Clinton. Democratic gains were fewer in conservative districts that Trump carried by wider margins in 2016.

But Democratic gains might well have been greater, were it not for heavily gerrymandered congressional districts in states like Ohio, Wisconsin and North Carolina. Gerrymandering occurs in the US when state legislatures draw boundaries for congressional districts that favour one party over another. Republicans gained an upper hand in this practice after the 2010 election when they won a large number of state legislatures and governorships.

“We are seeing something like a 54 to 46 percent split in the vote but Democrats are emerging with something like 52 percent of the House seats,” said Chris Hughes, a lawyer at FairVote, an advocacy group seeking reforms to the US election system.

“So even in a huge wave year for Democrats, when they win the national popular vote by eight points, they are still out on two percent of seats because of the way districts are drawn and the way our voting method itself functions,” Hughes told Al Jazeera.

A body of academic research by constitutional scholars shows just how unrepresentative the US system has become. Yet, as a practical matter, there is very little that can be done to change the system, short of winning elections. While the Constitution can be amended in theory, any changes require approval by two-thirds of the states, a nearly impossible threshold in the modern era.

Democrats have started to fight back against the Republican advantage in gerrymandered states. Former Obama attorney general Eric Holder is heading a new Democratic organisation, the National Democratic Redistricting Committee, that is focusing first on redrawing the congressional maps in Virginia, which will elect a new legislature next year. Many states will go through a redistricting process in 2021 after the 2020 census is completed.

Illustrating the redistricting challenge, FairVote projects that 358 House seats – 190 Republican and 168 Democrat – are highly likely to remain in each party’s hands in 2020. The battle for control of the House of Representatives will be fought in only 77 potentially competitive districts, more of them held by Democrats.

“We can predict a week after the election that 84 percent of seats will go to the same party in 2020 with fewer and fewer seats being competitive,” Hughes said.

In the Senate, the geographical advantage Republicans held in November’s election will flip to Democrats in 2020 and 2022. Of the 33 senators facing re-election next year, nine Republicans are likely to face competitive challenges, while perhaps four or five Democrats will be forced to defend their seats. That means control of Senate is likely to rest on outcomes in only 14 key battleground states.

US President Donald Trump says he always tries to tell the truth when he can, despite how the media portrays him.

Mr Trump has faced repeated criticism from US media and opponents for lying and distorting the truth around issues.

At times, conservatives have also censured the president for his claims.

“Sometimes it turns out to be where something happens that’s different or there’s a change, but I always like to be truthful,” Mr Trump told ABC’s Jonathan Karl.

The president also mentioned he was “pretty good” at estimating crowds during his interview, though one of the first times he clashed with the media was over the size of his inauguration crowd.

Since the start of his presidency, US media including the New York Times, Washington Post and Politifact have all kept running tallies of what they term Mr Trump’s lies and misleading statements.

Politifact, which is owned by the nonprofit Poynter Institute, currently has 11 pages on Mr Trump’s false statements.

Mr Trump has not escaped criticism from conservatives either over his questionable remarks.

Most recently, top Republican Paul Ryan was one of several Republicans to call into question the president’s assertion that he could amend the constitution with an executive order.

During a Wednesday rally in Florida, ahead of next week’s mid-term elections, Mr Trump re-launched his assault on US media, saying a third of Americans believed that the media was “the enemy of the people”.

He did not provide a source for this figure, but one poll from earlier this year showed that just under a third of people agreed with the idea that the media is the enemy of the people.

Critics accuse him of fomenting violence by using extreme and divisive rhetoric against opponents, the media, immigrants and Muslims.

Mr Trump has regularly accused some sections of the media of misrepresenting his administration’s work.

In July the publisher of the New York Times urged him to stop calling reporters “enemies of the people”, saying it would “lead to violence” against the media.

Mr Trump’s remarks come as a new NPR/PBS/Marist poll shows around 80% of voters are concerned that the lack of civility in Washington will incite violence.

While the overall numbers show 40% believe the president is to blame, along party lines, the figures differ as expected.

Only 7% of Republicans place the blame on the president, compared to 71% of Democrats. Republicans in turn blame Democrats, 44%, and the media, 42%.

But 45% of independent voters say Mr Trump remains the chief cause of the nationwide negative tone.

What is at stake at the mid-term elections?

Recent days have seen the president escalate his rhetoric towards the media and regarding immigration – moves some say are an effort to bolster his base with five days to go before the mid-term elections.

Voters are choosing new members of Congress, but how they vote will affect how the rest of Mr Trump’s presidency turns out.

Both houses of Congress are currently controlled by Mr Trump’s Republican Party.

The Democrats think they can win control of the House of Representatives this year by winning a majority of seats.

Doing so would let them block or delay the president’s plans by refusing to enact them.

Some opinion polls put the Democrats ahead in many places.