Supreme Court Chief Justice John Roberts pushes back against Trump, saying there are no ‘Obama judges or Trump judges’. 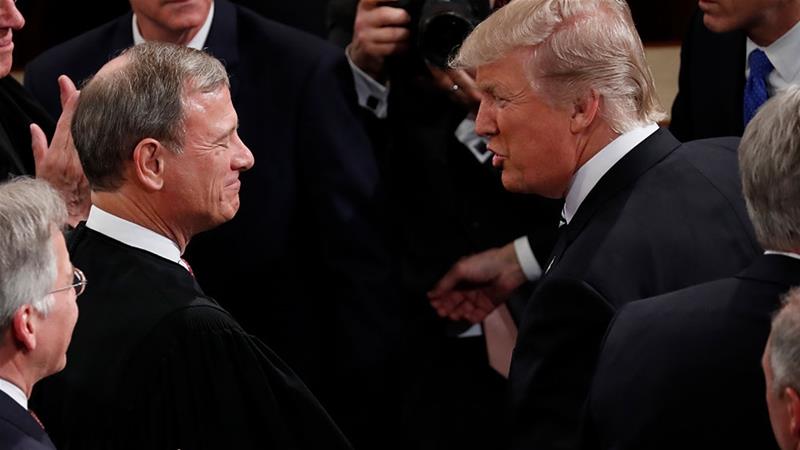 US Supreme Court Chief Justice John Roberts pushed back on Wednesday against Donald Trump‘s description of a judge who ruled against the president’s new asylum policy as an “Obama judge”.

It’s the first time that the Republican-appointed leader of the federal judiciary has offered even a hint of criticism of Trump, who has previously blasted federal judges who ruled against him.

Responding to a query made by the Associated Press, Roberts said, “We do not have Obama judges or Trump judges, Bush judges or Clinton judges. What we have is an extraordinary group of dedicated judges doing their level best to do equal right to those appearing before them.”

Roberts added that on the day before Thanksgiving that an “independent judiciary is something we should all be thankful for”.

The White House had no immediate comment on Roberts’s remarks.

A halt to new asylum rules

The ruling Trump criticised that prompted Roberts’s rebuke came from US District Judge Jon Tigar in San Francisco on Monday.

Tigar temporarily blocked the Trump administration from denying asylum to individuals who cross the US’s border between official ports of entry.

In his ruling, Tigar issued a temporary nationwide restraining order prohibiting the enforcement of the policy. The order will last until until at least December 19 when the judge scheduled a hearing to consider a more long-lasting injunction.

“Whatever the scope of the president’s authority, he may not rewrite the immigration laws to impose a condition that Congress has expressly forbidden,” Tigar wrote.

After Tigar’s ruling, Trump critcised the judge, calling him an “Obama judge” and the 9th US Circuit Court of Appeals itself a “disgrace”.

“Every case that gets filed in the 9th Circuit, we get beaten. And then we end up having to go to the Supreme Court, like the travel ban, and we won,” Trump told reporters on Tuesday.

But the initial travel ban ruling in 2017 was issued by US District Judge James Robart, an appointee of President George W Bush. Roberts also was appointed by Bush.

It was unclear what Trump meant when he said things would change. The 9th Circuit is by far the largest of the federal appellate courts, covering Alaska, Arizona, California, Hawaii, Idaho, Montana, Nevada, Oregon and Washington. Some Republicans in 9th Circuit states have proposed splitting the circuit in two, but legislation has not advanced.

Kavanaugh and white boys’ club politics in the US

The court has long had a majority of judges appointed by Democratic presidents, with the current breakdown at 16-7. But Trump has the opportunity to narrow that edge significantly because there are six vacancies, and he already has nominated candidates for five of them.

The president’s latest remarks come as the Supreme Court is enmeshed in controversy over his appointment of Justice Brett Kavanaugh. Several justices have spoken out about judicial independence and the danger of having the court viewed as a political institution that is divided between five conservative Republicans and four liberal Democrats. Roberts is widely seen as the justice closest to the middle and likely to determine the outcome of high-profile cases that split the court.

Trump’s remarks are part of a long list of criticisms from the president directed a judges and courts.

Trump last year referred to a jurist who ruled against him on his travel ban as a “so-called judge”. Trump as a presidential candidate in 2016 said a judge in a case involving Trump University was biased against him because of the jurist’s Mexican-American heritage.

The US Constitution established the federal judiciary as a co-equal branch of government with the executive and legislative branches as part of a system of checks and balances on power.