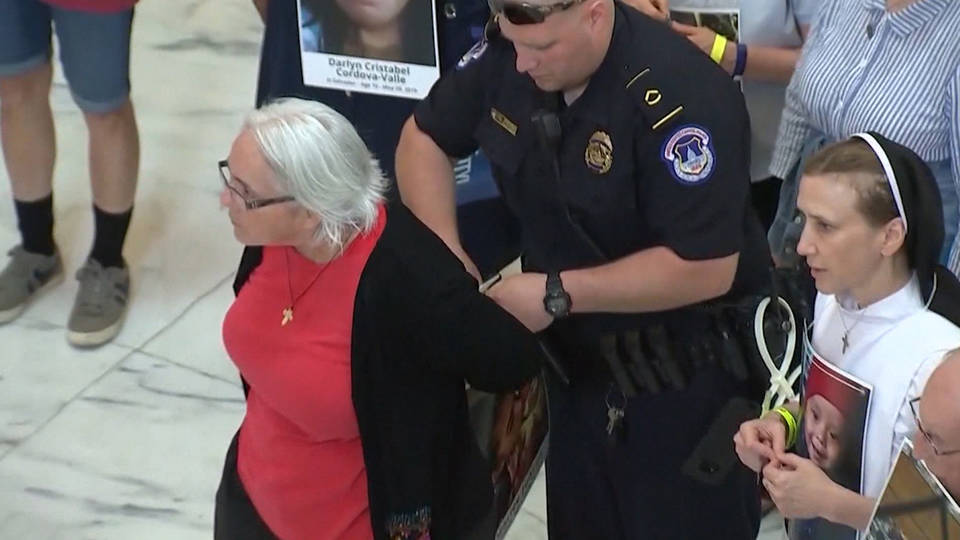 In Washington, D.C., Capitol Police arrested 70 Catholic nuns and clergy Thursday as they held a nonviolent sit-in protest inside the Russell Senate Office Building against the Trump administration’s inhumane treatment of immigrants and asylum seekers. More than a dozen protesters stood in a circle, holding the photographs of migrant children who have died in U.S. custody, and reciting their names. The latest protests came as immigrant communities across the U.S. have prepared for reported ICE raids that were scheduled to begin last weekend but have largely not materialized.

Collins cited a litany of problems caused by the shutdown in a Senate floor speech Wednesday. She said Trump’s plan “is by no means ideal but it would result in the reopening of government, my priority.”

WASHINGTON — Republican Sen. Susan Collins of Maine is coming out in support of President Donald Trump’s proposal for ending the government shutdown. Her spokeswoman says she also intends to vote for a Democratic alternative to reopen the government.

Collins cited a litany of problems caused by the shutdown in a Senate floor speech Wednesday. She said Trump’s plan “is by no means ideal but it would result in the reopening of government, my priority.”

The Senate will vote Thursday on the proposals, both of which face likely defeat. But Collins said, “the outlines of a compromise are before us.”

One bill reflects Trump’s demand for border wall funding in exchange for temporary protections for some immigrants. The Democratic proposal calls for short-term funding while a compromise is hashed out.

PORTLAND, Maine — Protestors in Maine are calling on Sen. Susan Collins to end the partial federal government shutdown. Organizers rallied and then marched to her office in Portland to deliver a large letter with demands that she publicly call for a vote and stand with Maine workers who are currently furloughed.

Some in attendance are working without a paycheck, including TSA employees in Maine. Bill Reiley is a TSA worker from Alfred, Maine and the vice president of the American Federation of Government Employees. Reiley said his co-workers couldn’t join him at the rally because they were on the clock.

“They are at the Jetport,” said Reiley. “They’re protecting the flights and protecting our national security. They are doing it as an indentured servant because they are not being paid.”

The rally was held prior to Sen. Collins speech on the Senate floor Wednesday. Collins spoke in favor of President Trump’s proposed plan to end the government shutdown. The president’s plan includes three years of temporary protective status for dreamers and funding for the border wall.

Senator Collins also talked about the Dreamers part of the plan saying she would rather their protective status to be permanent, rather than for just three years.

The Senate will vote on President Trump’s plan to end the government shut down tomorrow.

Another protest rally is planned Thursday in Portland and Bangor at 1:00 p.m.

There have been protests in the UK and elsewhere in Europe outside Amazon distribution centres over working conditions.

There have been protests in the UK and elsewhere in Europe outside Amazon distribution centres over working conditions. A UK union has described them as inhuman. The protests were timed to coincide with “Black Friday” which is the biggest shopping day of the year.

Correction: In a previous version of this story we said Amazon workers in the UK and elsewhere in Europe have been demonstrating outside distribution sites over working conditions. We want to make it clear that it was the GMB union at Milton Keynes where we filmed who were protesting. Not workers. We apologize for any misunderstanding.