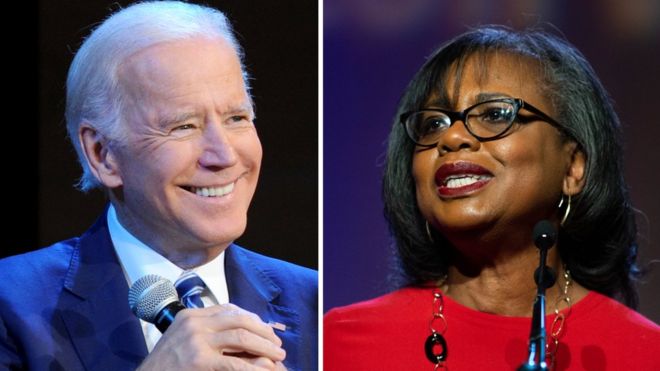 Top White House candidate Joe Biden has denied treating a woman badly when she accused a Supreme Court nominee of harassment before Congress in 1991.

Anita Hill had testified against Clarence Thomas to a committee chaired by Mr Biden. His handling of her evidence has long been criticised.

Speaking on ABC’s the View on Friday, Mr Biden also said that he was “sorry for the way she got treated”.

Ms Hill on Thursday told the New York Times she would not endorse Mr Biden.

The former US vice-president under Barack Obama tried to tamp down the controversy a day after formally launching his White House bid.

Mr Biden has shot to the tip of a crowded field of 20 contenders who are vying to become the Democratic standard-bearer in next year’s election against Republican President Donald Trump.

Ms Hill said that Mr Biden had called her before announcing his presidential bid and expressed his “regret for what she endured” during the hearing.

But she said that apology was not enough without “real change”.

“I cannot be satisfied by simply saying, ‘I’m sorry for what happened to you,'” Ms Hill, a law professor, told the newspaper.

She added that she could not support Mr Biden unless he showed “real accountability” for his handling of her testimony before Congress in 1991.

During his Friday appearance on The View, Mr Biden – who raised a whopping $6.3m (£4.8m) on the first day of his campaign – was asked about offering a personal apology to Ms Hill.

“I’m sorry for the way she got treated,” Mr Biden responded.

“If you go back and look at what I said or didn’t say, I don’t think I treated her badly.”

In 1991, Ms Hill was called to testify at Mr Thomas’ confirmation hearing after an FBI interview with her was leaked to the press.

The hearing was conducted by an all-white, all-male panel, and several women apparently willing to corroborate Ms Hill’s account were not called to testify by Mr Biden.

Both Ms Hill and Justice Thomas are African-American.

Mr Biden voted to send Justice Thomas’ nomination out of the committee to the Senate floor, then voted against him in the full confirmation vote.

Decades on, the event is considered a political embarrassment for Mr Biden, who remains a favourite to secure the Democratic nomination.

Earlier this month, the former vice-president pledged to be “more mindful” about physical contact with women after seven women accused him of unwelcome physical contact.

Mr Biden has also been reproached by the mother of an anti-racism protester who was killed during a far-right rally in Charlottesville, Virginia, in August 2017.

Susan Bro told the Daily Beast the presidential hopeful had not notified her that he planned to invoke Heather Heyer’s death during his campaign launch video on Thursday.

“Most people do that sort of thing,” she told the Daily Beast. “They capitalise on whatever situation is handy.

“He didn’t reach out to me, and didn’t mention her by name specifically, and he probably knew we don’t endorse candidates.”

In a later interview with CNN, Ms Bro softened her tone, saying she was not particularly upset because “the issue is about the hate, it’s not about Heather”.

Ms Bro added that she had told Mr Biden his video could have traumatised for some Charlottesville survivors.

Senator Bernie Sanders has apologised to female staff members on his 2016 US presidential campaign who allege they were mistreated by male aides.

“To women in our campaign who were harassed or mistreated, I apologise,” the Vermont independent wrote in a statement on Twitter on Thursday.

His apology comes as he contemplates another White House bid under the Democratic banner in 2020.

Several aides have complained of a “predatory culture” in his campaign.

What is the background?

On Wednesday, Politico reported that the deputy national field director for Mr Sanders’ campaign had forcibly kissed a younger subordinate in 2016.

“Candidates who allow people like Robert Becker to lead their organisations shouldn’t earn the highest office in our government,” said the woman, naming the aide.

The unnamed accuser said she never reported the alleged incident because it came on the same day that Mr Sanders’ campaign ended after he failed to snatch the Democratic nomination from Hillary Clinton.

Mr Becker denies any harassment, and no criminal charges have been filed.

The allegation comes as dozens of former Sanders campaign workers have signed a letter requesting a meeting with him “to discuss the issue of sexual violence and harassment on the 2016 campaign”.

What did Sanders say?

Mr Sanders’ Twitter apology comes after he said sorry on CNN last week “to any woman who felt that she was not treated appropriately”.

He was criticised for saying he was “a little bit busy running around the country, trying to make the case” for his presidency, and was not aware of the allegations.

To the women on my 2016 campaign who were harassed or mistreated, thank you, from the bottom of my heart, for speaking out. I apologize.

We can’t just talk about ending sexism and discrimination. It must be a reality in our daily lives. That was clearly not the case in 2016.

Claims of sexual harassment have recently dogged the campaign of Democratic Senator Kamala Harris, who may also enter the White House race.

The California senator’s biography, which debuted last week, contains praise for the aide, who resigned after the payout was revealed.