Democrats are calling for a Republican congressman to resign after he defended abortion bans by saying that humankind might not exist but for rape or incest.

Without rape or incest “would there be any population of the world left?” nine-term lawmaker Steve King asked the Des Moines Register newspaper.

Mr King was defending anti-abortion legislation that does not make exceptions for rape or incest.

“You are a disgrace. Resign,” Ms Gillibrand wrote on Twitter. Her remarks were quickly echoed by other 2020 Democratic hopefuls Cory Booker, Beto O’Rourke and Julián Castro.

“I am 100% pro-life but Steve King’s bizarre comments and behaviour diminish our message,” he wrote on Twitter.

On Wednesday, Mr King told the Des Moines Register that the Republican leadership had stopped bills he sponsored banning abortions from advancing through the US House of Representatives.

“What if we went back through all the family trees and just pulled out anyone who was a product of rape or incest? Would there be any population of the world left if we did that?” Mr King said on Wednesday.

“Considering all the wars and all the rapes and pillages that happened throughout all these different nations, I know that I can’t say that I was not a part of a product of that.” 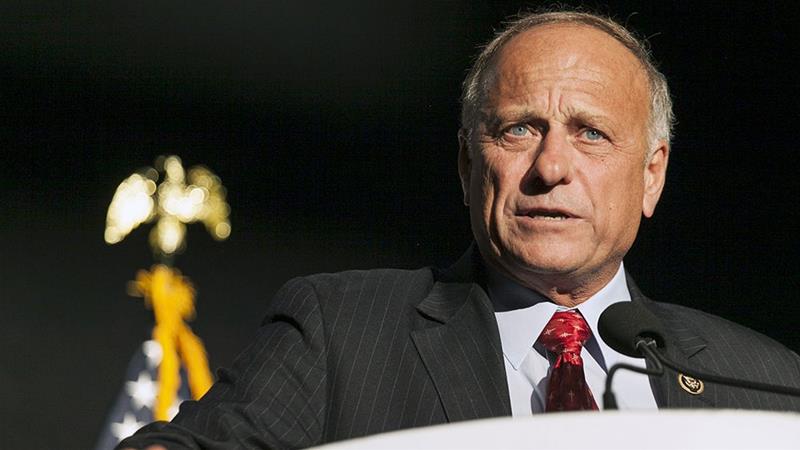 Washington, DC – US Republican Congressman Steve King’s recent defence of white supremacy and white nationalism has provoked controversy and backlash, including from within his own party.

House Democrats are organising a vote to rebuke King’s comments, while the Republican Party has stripped the hardline politician of his committee assignments in Congress.

King served as chairman of the immigration and border security sub-committee, as well as Agriculture, Small Business and Judiciary committees in the last Congress, among others.

“We will not tolerate this in the Republican Party,” House Minority Leader Kevin McCarthy said on Monday, in the wake of a New York Times report in which King ostensibly defended white nationalism and white supremacy.

“White nationalist, white supremacist, Western civilisation – how did that language become offensive?” King said in the New York Times interview. “Why did I sit in classes teaching me about the merits of our history and our civilisation?”

In a statement released on Monday, King claimed that his quotes were “mischaracterised” and said McCarthy’s decision to remove King’s committee assignments “ignores the truth”.

Claiming that he has denounced white nationalism and white supremacy, King said, “My record as a vocal advocate for Western Civilisation is nearly as full as my record in defence of Freedom of Speech [all sic].”

In a separate statement directly addressing the New York Times article, King dismissed claims that he sympathises with white nationalists or white supremacists. “Under any fair political definition, I am simply a Nationalist [sic].”

For years, few in the Republican Party batted an eye when King railed against Muslims and immigrants, made overtly racist statements, and built ties with hardline elements of the European far right.

King, an early supporter of President Donald Trump, promoted the idea of building a wall on the US-Mexico border over a decade ago and introduced legislation to end automatic birthright citizenship as far back as 2011.

Christopher Mathias, a HuffPost reporter who focuses on the far right, started following King closely in late 2017 as the politician’s social media activity increasingly overlapped with European far-rightists and some neo-Nazis.

In December 2017, King tweeted a link to an article about Hungarian Prime Minister Viktor Orban’s opposition to “mixing cultures”. Alongside the link, King wrote, “Diversity is not our strength.”

In June 2018, King retweeted Mark Collett, a British far-rightist who has described himself as a “Nazi sympathiser”. Collett had shared an article claiming that a majority of young Italians oppose immigration.

“Europe is waking up,” King wrote alongside that retweet. “Will America … in time?”

“At that point, when King refused to apologise for promoting a Nazi on Twitter, I decided to take a longer, closer look at him,” Mathias told Al Jazeera.

Many of these incidents failed to prompt condemnation from fellow Republicans, but the latest King controversy has marginalised him within his own party.

“It’s partly the fact that it was in the [New York] Times and people pay attention to the Times, and it was also that King almost lost in November,” Mathias added, explaining that King has become more of “toxic asset” for Republicans than he was before.

“Because he’s so brazen and crass, it gives them the opportunity to say they denounce white supremacy, when in fact most of them are busy supporting Trump’s border wall.”

In recent years, King has travelled to Europe often to meet far-right parties and groups, including the Freedom Party of Austria, which was founded by former Nazi officers and is currently a junior coalition partner in the Austrian government.

In the US South, anti-Confederate protesters face harassment

Last year, he endorsed the Toronto mayoral campaign of Faith Goldy, a far-right candidate who has made neo-Nazi remarks.

He added, “Steve King says explicitly what [Republicans] would rather not say; the Republican Party is made up of people who want to deny the racial implications of their policies.”