If a proposed bill is signed into law by Governor Janet Mills, Maine would become one of the first states in the country to ban the use of disposable foam food containers. 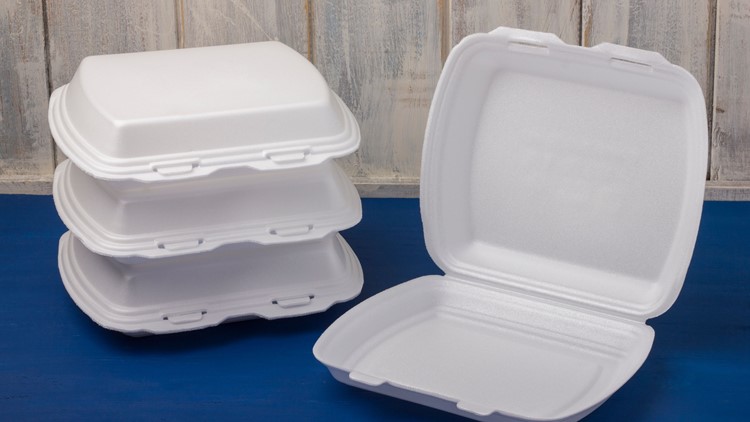 AUGUSTA, Maine — A bill that would ban the sale or use of disposable foam food containers in Maine is advancing in Legislature, despite divided opinions among various state organizations.

Rep. Stanley Zeigler (D-Montville) is sponsoring LD 289, “An Act To Prohibit the Use of Certain Disposable Food Service Containers”.

Starting on Jan. 1, 2020, this bill would prohibit stores from selling or distributing any disposable food containers that are made entirely or partially of polystyrene foam, or styrofoam.

The bill would also require the Department of Environmental Protection to adopt rules that would implement these provisions.

“With the threats posed by plastic pollution becoming more apparent, costly, and even deadly to wildlife, we need to be doing everything possible to limit our use and better manage our single-use, disposable plastics — starting with eliminating the use of unnecessary forms like plastic foam,” said Sarah Lakeman, Director of Sustainable Maine. “There are affordable alternatives to foam that are less wasteful and less harmful to the environment we can be pursuing.”

On Tuesday, April 16, the bill was approved by the Senate. It faces a series of procedural votes and will then head to Gov. Janet Mills for review.

If signed into law, Maine would become one of the first states in the country to ban the use of disposable foam food containers.

The support behind this bill, however, is largely divided. In the 87-51 House vote earlier this month, the Portland Press Herald reported that all Republicans opposed the bill, while all Democrats and Independents supported it.

“The Maine Chamber of Commerce is skeptical about legislation that bans products in the market on a state by state basis,” said Ben Gilman, Senior Government Relations Specialist at the MCC. “We prefer market decisions to be based on consumers driving decisions.”

Gilman added that the impact of a state by state ban could create an unbalanced playing field for business in Maine, as compared to other states.

Other groups, like the Maine Grocers and Food Producers Association and the Maine Tourism Association, also oppose the proposed ban, saying it would hike up prices for Mainers.

“We continue to express concerns as this bill moves through the Maine legislature,” said Christine Cummings, Executive Director of MGFPA. “If the bill passes, it would make Maine an outlier as the first in the nation to pass such as a ban on polystyrene for food service containers. Increased product costs will occur, and our Maine residents, the customers, will inevitably incur the price of banning polystyrene and sourcing alternatives.”

Still, those in favor of the bill say that styrofoam can’t be recycled in the state and is costly to towns and cities. They also say there are affordable alternatives to styrofoam, which could help prevent pollution.

According to the Natural Resources Council of Maine, more than 150 municipalities or regions have already banned disposable foam food containers, including 14 towns in Maine. They have also been banned in state facilities and functions since 1990.