Christine Rollins, 59, was attacked in Anahuac, east of Houston, outside a home where she worked as a caregiver to an elderly woman.

Chambers County Sheriff Brian Hawthorne told reporters on Monday: “In my 35 years I will tell you it’s one of the worst things I’ve ever seen.”

The victim was found by the 84-year-old woman she worked for after failing to show up for her shift on Sunday.

“No doubt in my mind that it was multiple animals and we can tell that from the different sizes of the bites,” said Sheriff Hawthorne, adding that the homeowner’s dogs appear to have chased away the hogs before Rollins’ body was discovered.

The sheriff said neighbours had recently complained about rampant feral hogs, and officials have since laid traps for them.

“This is a very rare incident – [from] just what little research we have found there’s less than six of these that have been reported in the nation,” he said.

The state of Texas is facing growing calls to halt the upcoming execution of Rodney Reed, an African-American man who has spent over 20 years on death row for a rape and murder he says he did not commit. A group of 26 Texas lawmakers — including both Democrats and Republicans — have written a letter this week to Governor Greg Abbott to stop the execution planned for November 20. More than 1.4 million people have signed an online petition to save Reed’s life. Supporters include celebrities Kim Kardashian West, Rihanna and Meek Mill. Reed was sentenced to die after being convicted of the 1996 murder of a 19-year-old white woman, Stacey Stites, with whom he was having an affair. But since Reed’s trial, substantial evidence has emerged implicating Stites’s then-fiancé, a white police officer named Jimmy Fennell, who was later jailed on kidnapping and rape charges in another case. In a major development, a man who spent time in jail with Fennell signed an affidavit last month asserting that Fennell had admitted in prison that he had killed his fiancée because she was having an affair with a black man.

John William King was convicted of killing James Byrd Jr in 1998 by dragging the Texas black man behind a truck for 5km.

A white supremacist convicted of killing James Byrd Jr in 1998 by dragging the 49-year-old black man behind a truck in one of the most notorious hate crimes in modern times is scheduled to be executed in Texas on Wednesday.

John William “Bill” King, 44, is scheduled to be killed by lethal injection at the state’s death chamber in Huntsville at 6pm local time (23:00GMT).

King along with Shawn Berry and Lawrence Brewer were accused of kidnapping Byrd while he hitchhiked in Jasper, Texas, on June 7, 1998.

Prosecutors said the men dragged him behind their 1982 gray Ford pickup truck for three miles (5 km) before dumping his body in front of an African-American church.

A “KKK” engraved lighter was among the evidence police found at the scene, court documents showed.

The murder, along with the killing of Matthew Shepard, a gay University of Wyoming student who was beaten and left to die tied to a fence, was also the genesis of the federal hate crimes prevention act passed in 2009.

King was found guilty of capital murder and sentenced to death in 1999.

He was a member of a white supremacist gang and spoke of starting a race war while in prison for a previous crime.

He also talked about initiating new members by having them kidnap and murder black people, court documents showed.

“Regardless of the outcome of this, we have made history,” King wrote in a letter to Brewer obtained by jail officials after they were convicted of killing Byrd, CNN reported.

‘You can’t fight murder with murder’

King has always maintained his innocence, saying that he left the two other men before Byrd was killed.

His lawyers filed an appeal to the US Supreme Court after a Texas appeals court denied a request to halt the execution on Monday.

Berry and Brewer were also convicted of murder.

Some of Byrd’s family members have said they would have rather seen the men spend the rest of their lives in prison.

“You can’t fight murder with murder,” his son Ross Byrd told Reuters the night before Brewer’s execution in 2011.

King will be the third inmate in Texas and the United States to be executed in 2019, according to the Death Penalty Information Center. 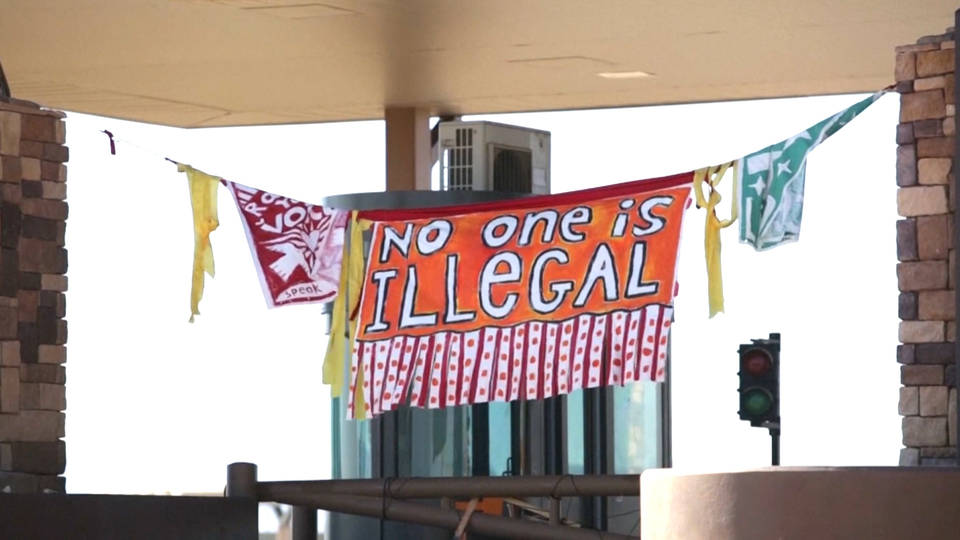 In Texas, the controversial Tornillo prison camp, which at one point jailed several thousand immigrant youths, closed Friday, after months of criticism from immigrant and human rights activists, Democratic lawmakers and health professionals. This is activist Janie Stein, responding to the news of the Tornillo shutdown.

Newly released video footage shows U.S. Customs and Border Protection agents telling 16-year-old Mexican teenager Cruz Velazquez to drink from a bottle of liquid methamphetamine at a border checkpoint in San Diego, causing him to die from an acute drug overdose. In 2013, the teenager was crossing from Tijuana to California with two bottles of what he claimed was apple juice. The video shows the border agents, who suspected the liquid was liquid meth, repeatedly encouraging the teenager to drink from it and prove he wasn’t lying. Minutes after the teenager sipped on the liquid, his body began convulsing, and he began shouting “my heart” in Spanish. He passed away shortly after. The agents only tested the liquid after Cruz took several sips and began overdosing. The officers were never disciplined. Critics say Velazquez’s case is just the latest example of rampant abuse and mistreatment by border agents.