On Friday President Trump signed a directive instructing the military to stop paying for medical treatment for transgender people currently serving in the U.S. military and halting an Obama-era plan that would have allowed transgender people to be recruited into the U.S. armed forces. The move follows Trump’s announcement last month on Twitter that he’d ban transgender people from serving in the U.S. military. Among those who have criticized Trump over the ban is Interior Secretary Ryan Zinke’s daughter Jennifer Detlefsen, who is a Navy veteran, and said of Trump, “This man is a disgrace.” This is ACLU attorney Chase Strangio, speaking on Democracy Now! on Friday, just before the memo was signed.

Chase Strangio: “The reality is that the military has $1 billion in its budget for healthcare, and this is a fraction of that. And what it reflects is a misunderstanding and discrimination of transgender individuals.”

The U.S. military currently spends about $8.4 million on medical services for transgender troops—a fraction of the military’s budget. In contrast, the Center for American Progress says President Trump has run up a $29 million budget on his 11 trips to his private golf resorts Mar-a-Lago and Bedminster so far this year. 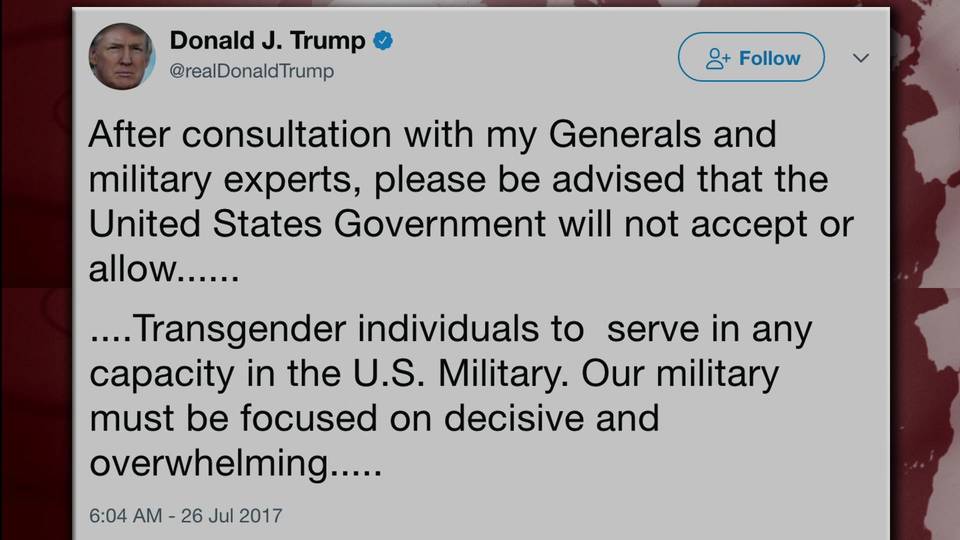 In a surprise announcement, President Trump tweeted Wednesday he would ban transgender people from serving in the U.S. military.  This is despite his pledge at the Republican National Convention last year that he would “do everything in [his] power to protect our LGBTQ citizens.”

This is Mara Keisling of the National Center for Transgender Equality.

Mara Keisling: “Well, it seems that what the president is saying is that he is going to fire 15,000 highly trained, motivated troops. It is a catastrophe for military readiness. But it is just absurd that he would think to do this—and do it apparently without consulting the Pentagon.”

Trump’s announcement appeared to shock even the Pentagon, which has directed all questions about the order to the White House. Veterans Affairs Secretary David Shulkin said he learned of the policy change from Trump’s tweet. It came after Defense Secretary James Mattis said last month he would give generals another six months to determine whether to allow trangender troops to enlist.

A study by the RAND Corporation estimates gender reassignment treatments would cost the military between $2.5 million and $8.5 million annually—a minuscule fraction of the Pentagon’s $600 billion budget. By comparison, the total military spending on erectile dysfunction medicines amounts to 10 times as much annually.